On March 22, 2018 we renamed the Awesome Plan to the Pro Plan, and changed its price from $10/mo to $15/mo. We announced the change and offered a promotion to let users lock in the $10/mo. price one month earlier, on February 22.

In this analysis we’ll analyze the effect that the price change has had on mobile revenue. In our previous analyses we’ve focused only on Stripe revenue and overlooked mobile. This analysis is at least 6 months late, but better late than never.

We’ll collect mobile MRR data for all dates since June 2017.

Now that we’ve collected the data, let’s plot mobile MRR over the course of 2018. 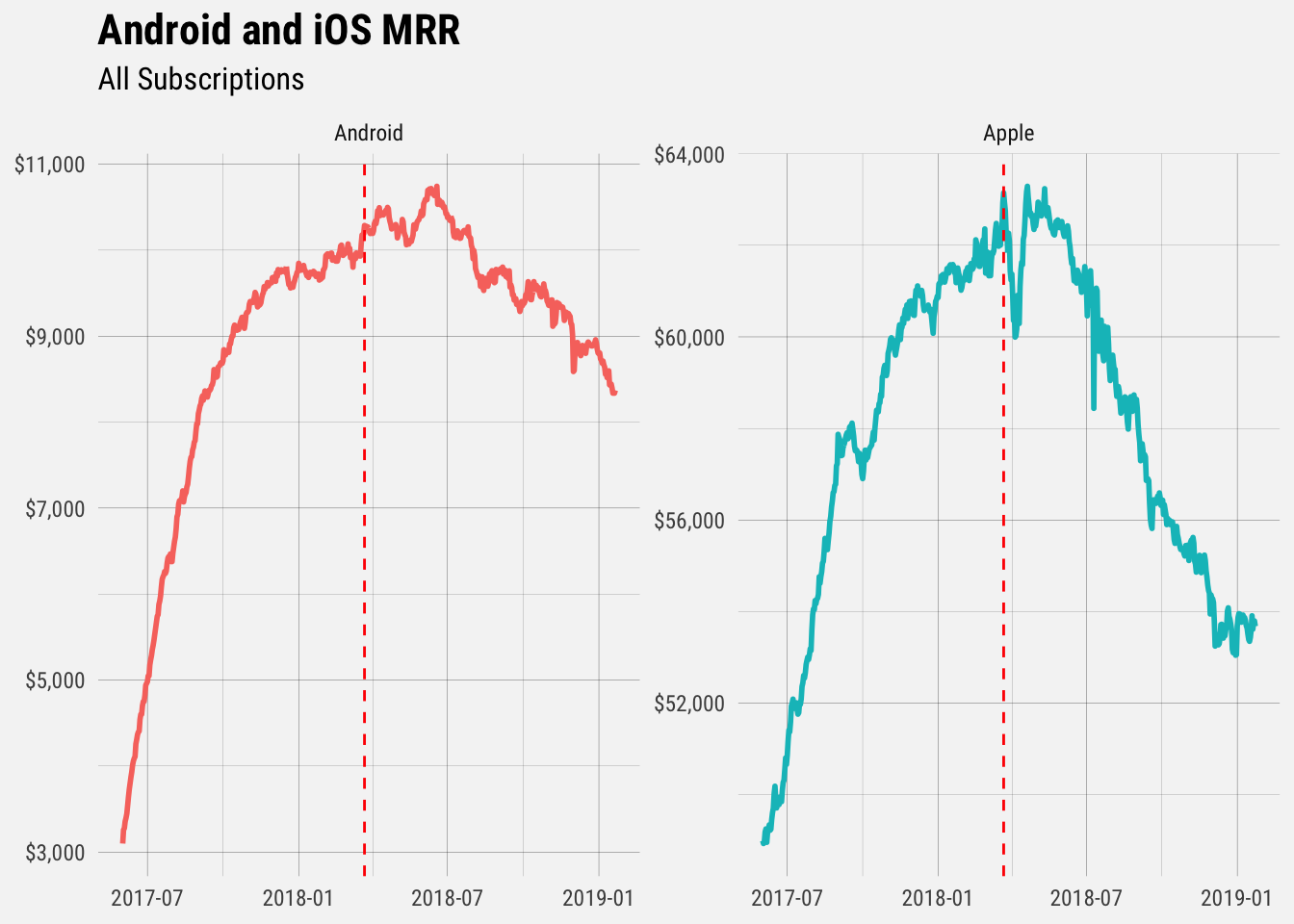 Oh dear. The red dotted line represents the date that the price change fully went into effect. Although revenue growth had already slowed for both Android and Apple, the date of the price change seems to conincide with a peak in mobile revenue, followed by a marked decline.

If we look only at monthly subscriptions, we can see the effect more clearly. 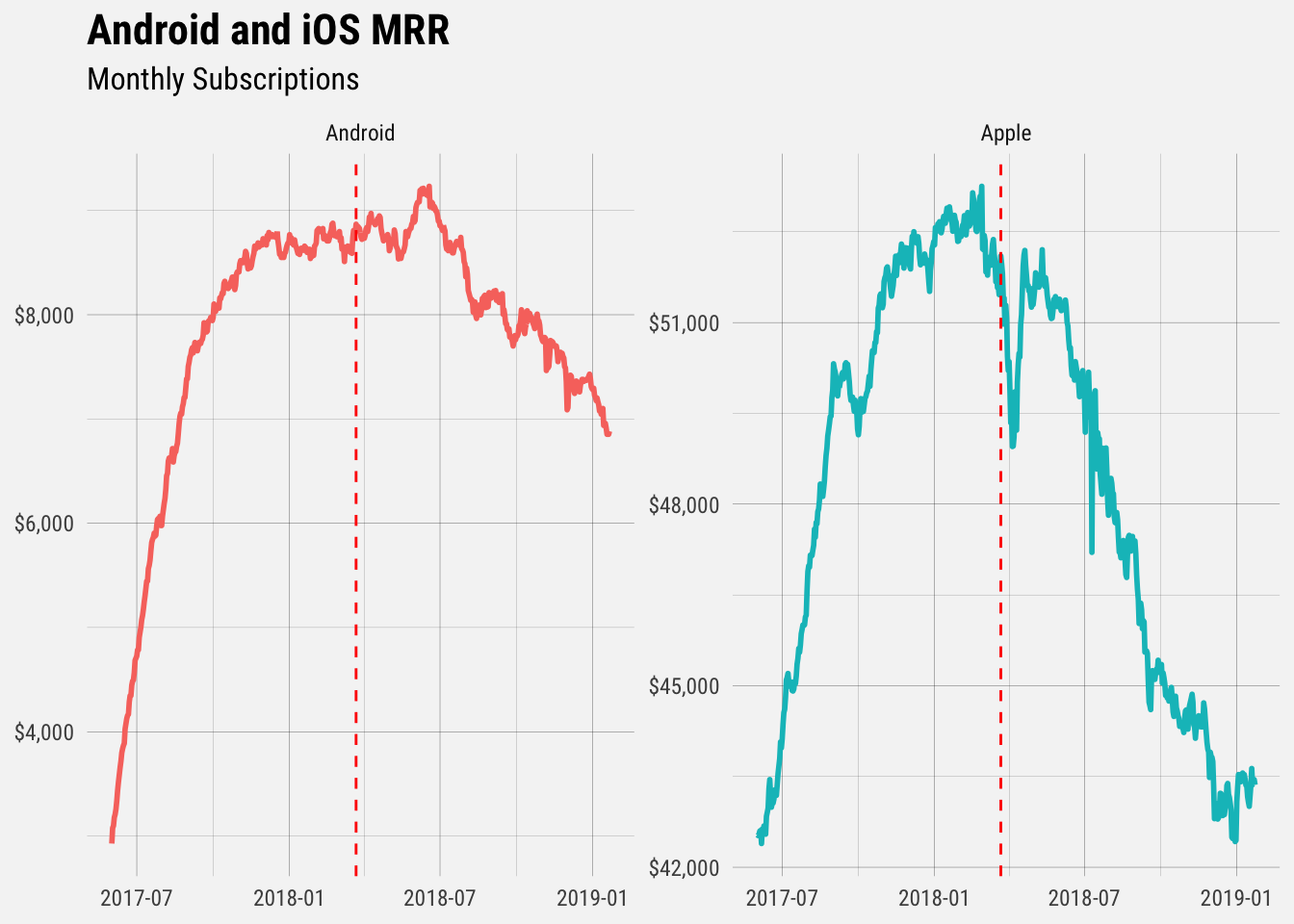 Measuring the Effect on MRR

We’ll also try to isolate the effect of the price change by excluding the weeks during which the promotional offer had a large effect. We do this by defining the “post-intervention period” as the weeks from April 2 onwards.

The “pre-intervention period”" includes dates from June 1, 2017 to the week of February 26, which is the week that we announced the price change and the offer to lock in the lower prices. We use the average MRR growth from the dates in the pre-intervention period to create our forecast of what MRR growth would have looked like without the pricing change. In this case, the simple average of is used.

You’ll notice that we’ve left out a few weeks in March. The weeks of March 19 and March 26 saw unusually high MRR growth, and it’s my assumption is that this was primarily due to our offer to let users lock in the lower prices. We’ll use the weeks outside of this time window for our analysis. 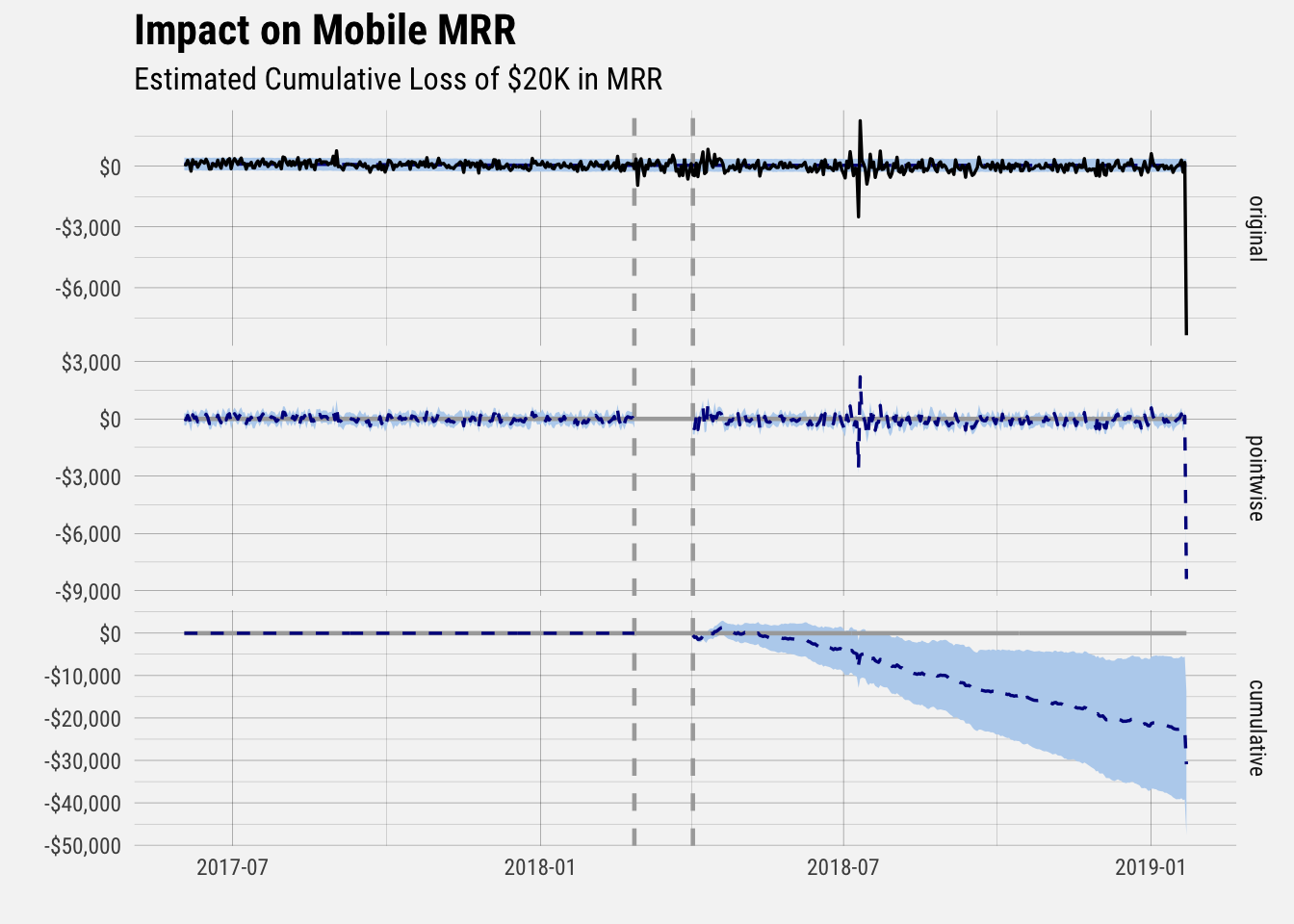 The top panel in the graph shows the actual observed data (the black line) as well as the counterfactual, which is our best guess at what daily MRR growth would have been had we not introduced a new plan.

The second panel displays the estimated effect that the price change had on MRR growth each day, and the bottom panel shows the cumulative effect over time on daily MRR growth.

Lets’s look at the summary of our causal impact model.

The probability of a true causal effect is well over 99%. Average daily MRR growth for the mobile apps was $44 per day before February 26, and -$60 per day for the dates following March 26. This equates a relative effect of around -238%.