We’re currently working with Twitter to finalize our contract for the next 12 months and there is a possibility to lock in the next pricing tier for the API that Reply uses. In order to make an informed decision on this, we would like to forecast the number of Twitter handles used in Reply. We currently pay $11,250/mo for 1,000 Twitter handles.

The Reply data we need lives in BigQuery. We can collect this data with the bigrquery package.

There are 26 thousand Twitter profiles in this dataset. Not all of them are currently being used though.

Let’s quickly plot the cumulative sum of the number of Twitter profiles connected to Reply across all time. 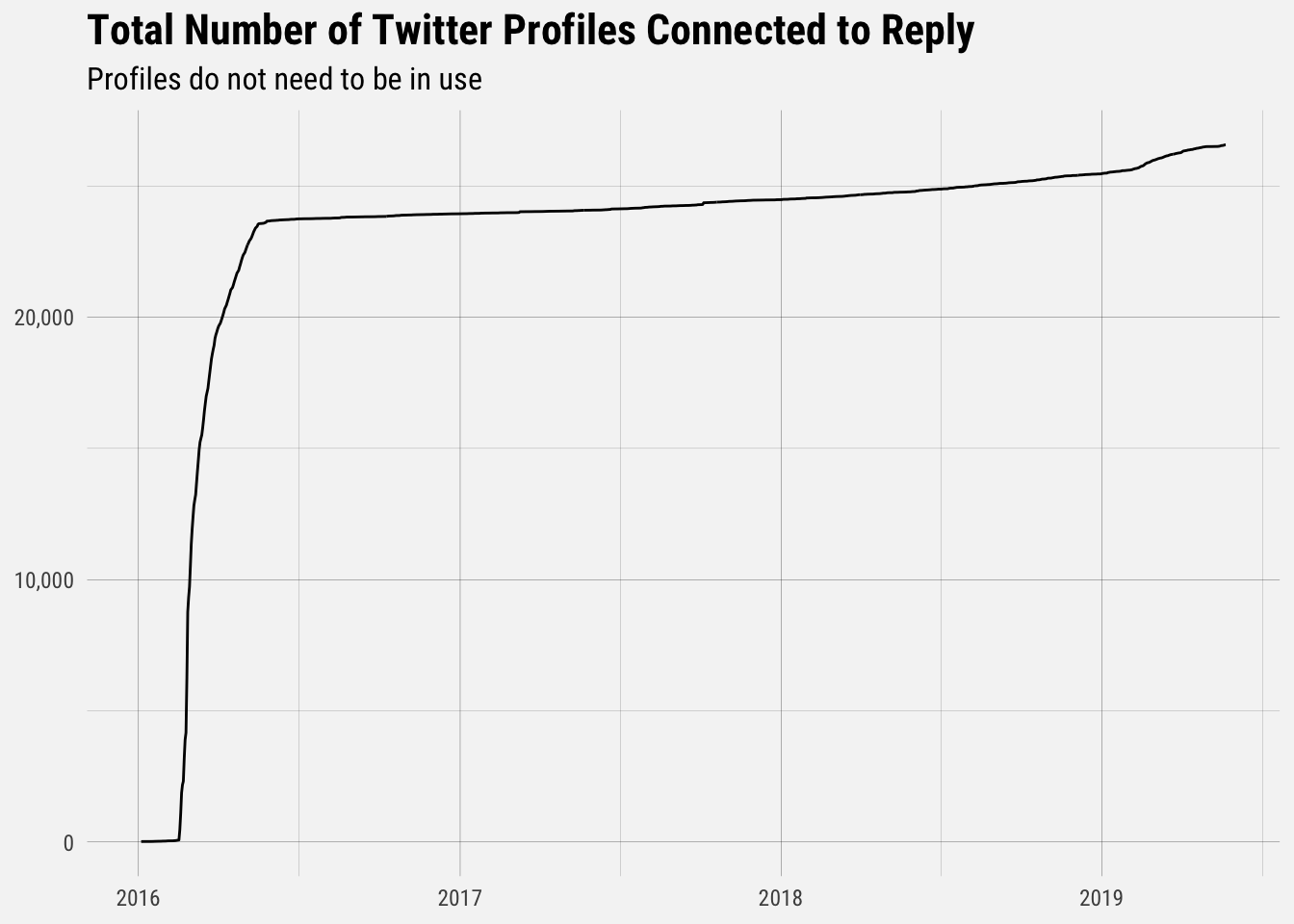 We will use the conversations table to get a better sense of how many Twitter profiles are in use.

There are 7.8 million Twitter conversations in this dataset. Let’s extract the profile ids.

Now let’s group the data by month and count the profile ids. 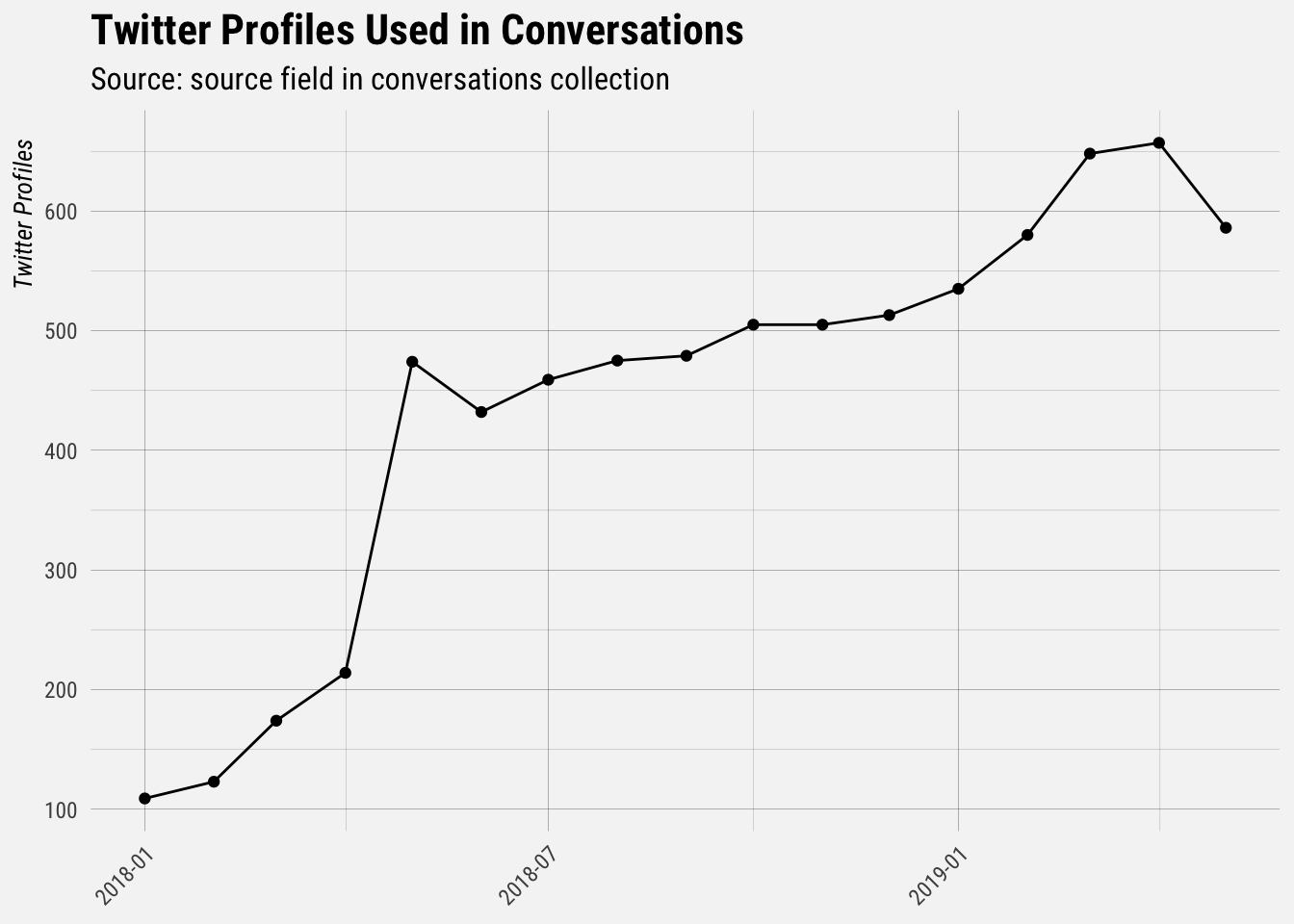 It looks like there was a big spike in May 2018. Let’s only look at data beyond that point, so that we have less noise when making our predictions. 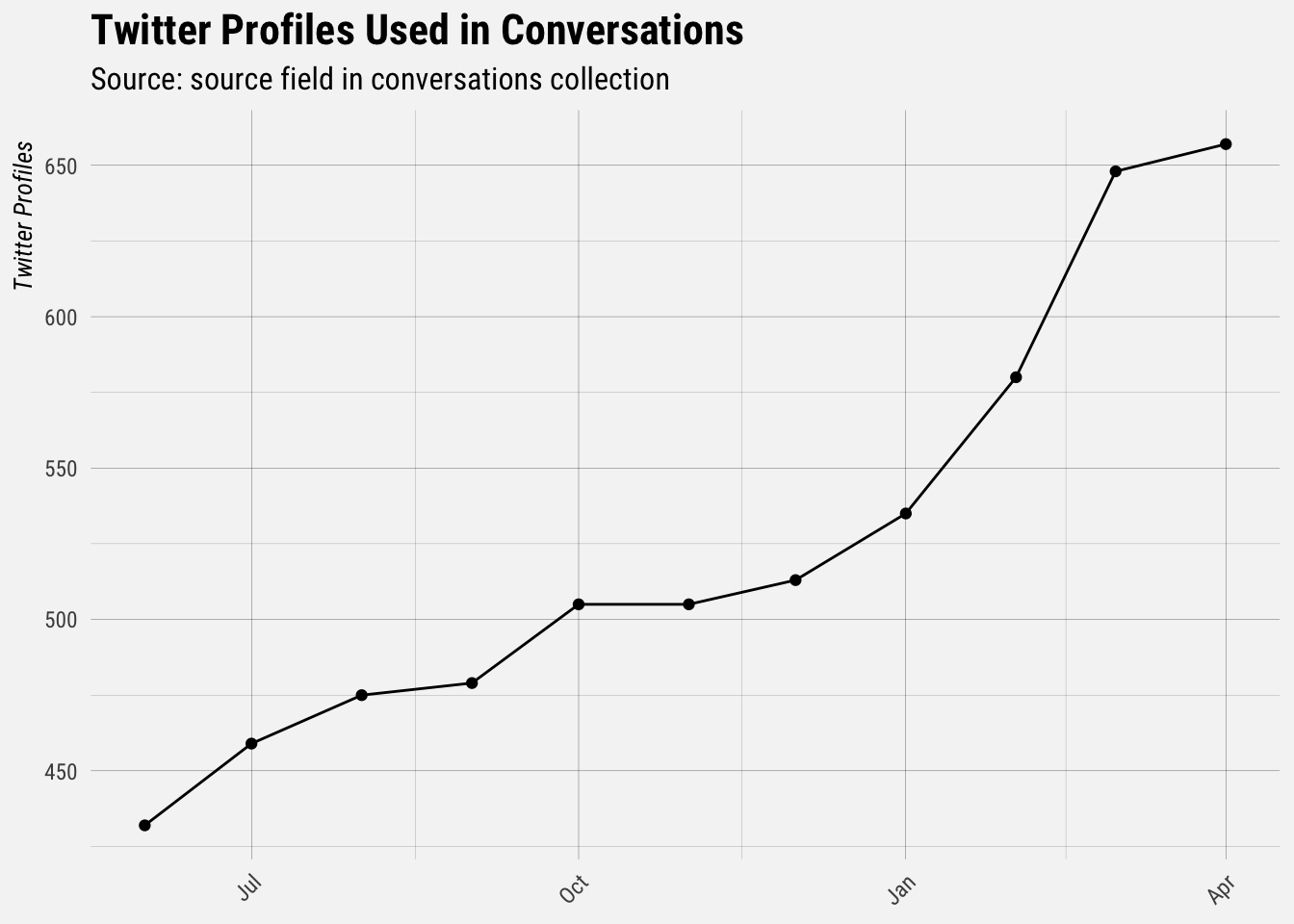 Great, we can use this dataset to make our forecasts.

We’ll use the prophet package developed by the folks at Facebook to make our basic forecasts. We first need to prep a dataframe with columns ds and y, containing the date and numeric value respectively. The ds column should be YYYY-MM-DD for a date, or YYYY-MM-DD HH:MM:SS for a timestamp.

Now let’s make the forecast and plot the results. 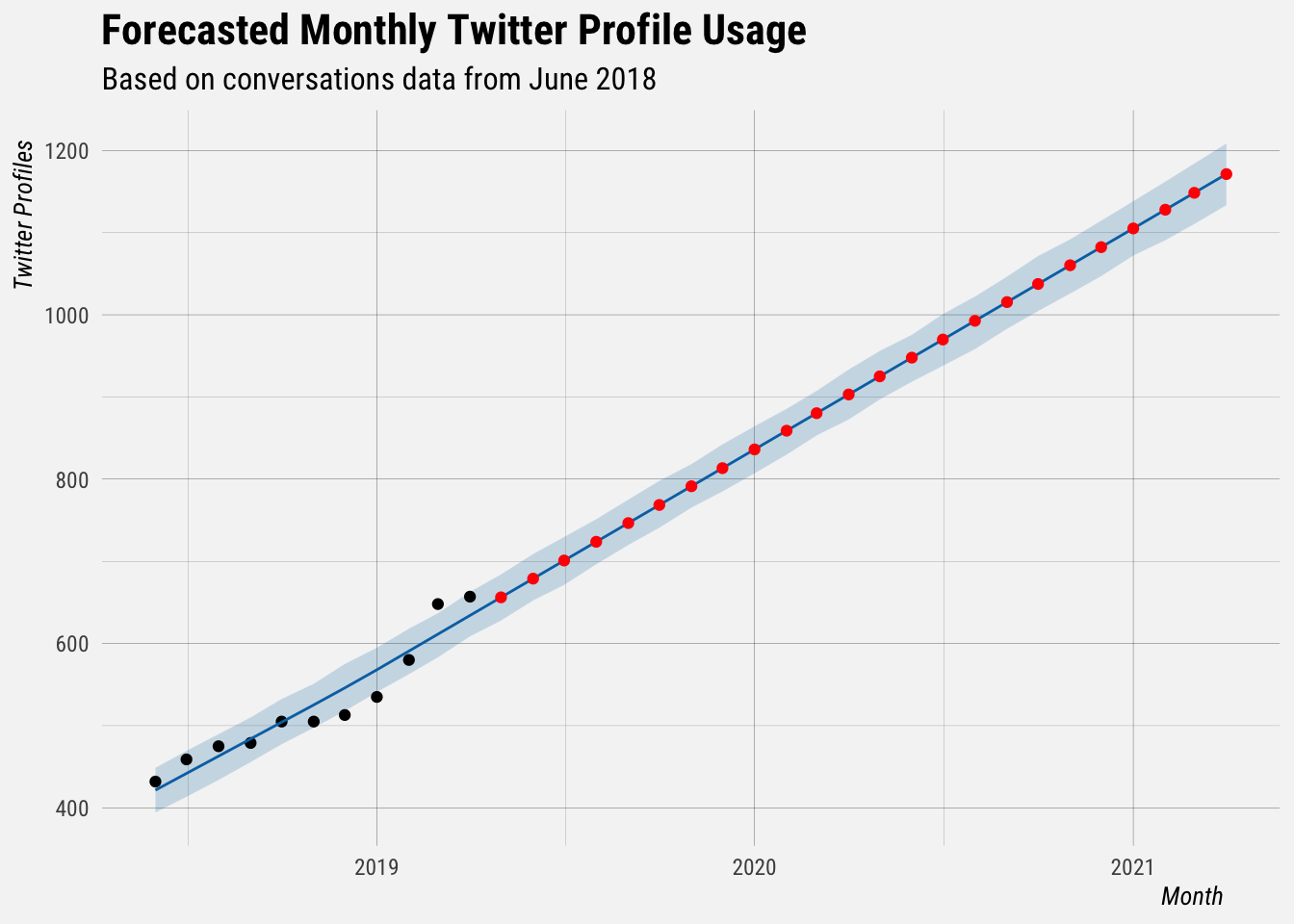 The red dots are the forecasted values. This forecast assumes a linear growth trend. The biggest source of uncertainty in the forecast is the potential for future trend changes, so the furthest months forecasted for have the highest risk of being off.

Let’s get the forecasted values and the confidence intervals. The upper_bound and lower_bound represent the uncertainty interval, which is based on the variance between historic months. You can see that most of the black dots in the plot above fall within this uncertainty interval.

Based on this linear growth, we would start getting close to hitting 1000 profiles per month around August or September of 2020.

Let’s see how Twitter usage compares with usage of the other social networks. We’ll use DBI in conjunction with the bigrquery package to collect the data. 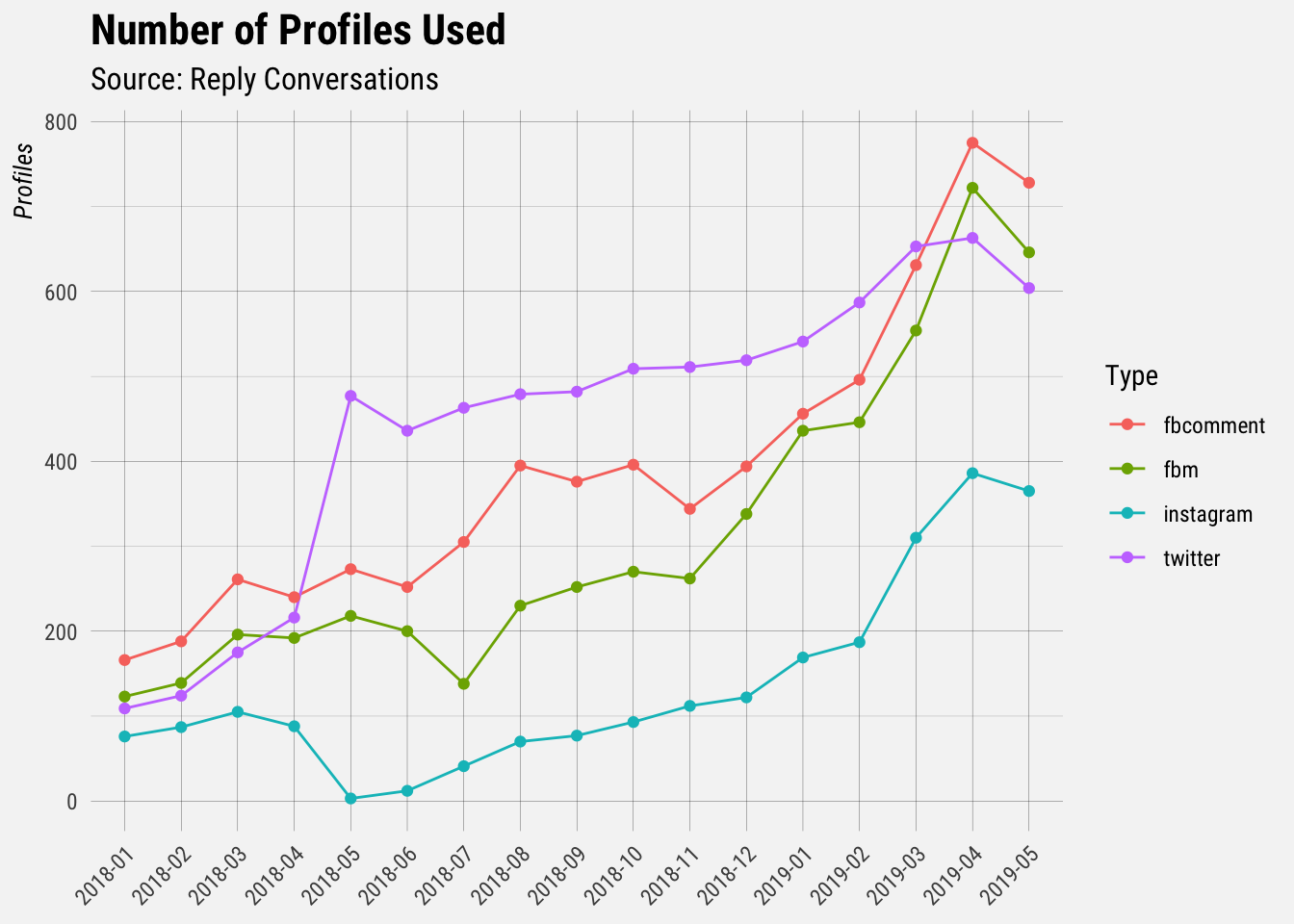