In this post we’ll analyze 2058 NPS survey responses gathered from Pendo. We’ll find the most frequently occurring words for Promoters, Passives, and Detractors, and calculate which of them are most unique to each segment. We’ll also visualize networks of terms that commonly occur together.

In order to analyze the text efficiently, we’ll want to make use of some “tidy” data principles. To consider this data set tidy we need to have one token (or one observation in most other analyses) per row. A token in this text analysis is one word or a group of words.

Now that the data has been restructured into a tidy format, we can do some exploration. Let’s start by looking at the most common terms present in the NPS survey responses. 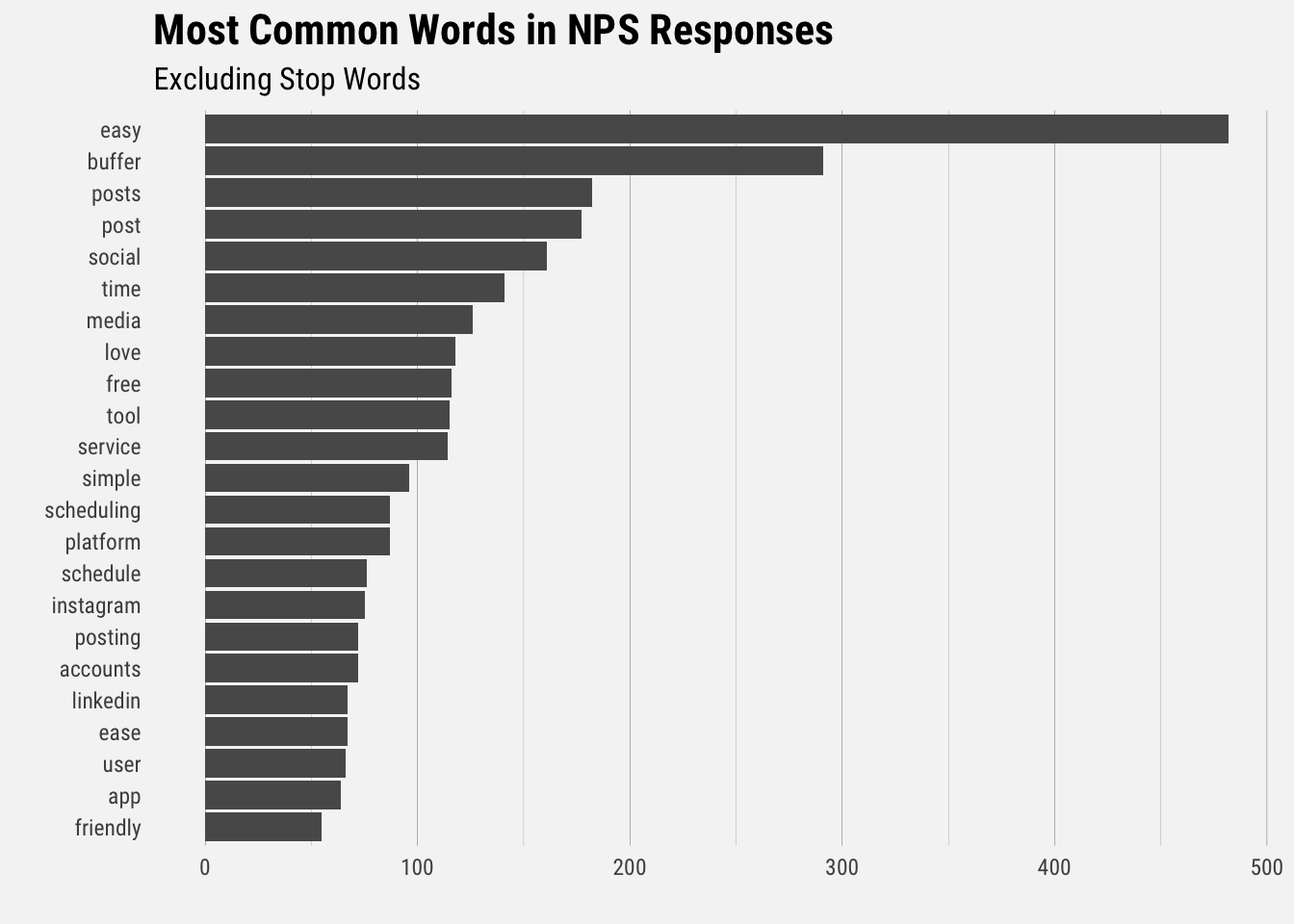 It’s great to see that “easy” is the most common word in our NPS survey responses. It’s easy to see themes of simplicity and saving time. Now let’s look at the top words for each NPS segment. 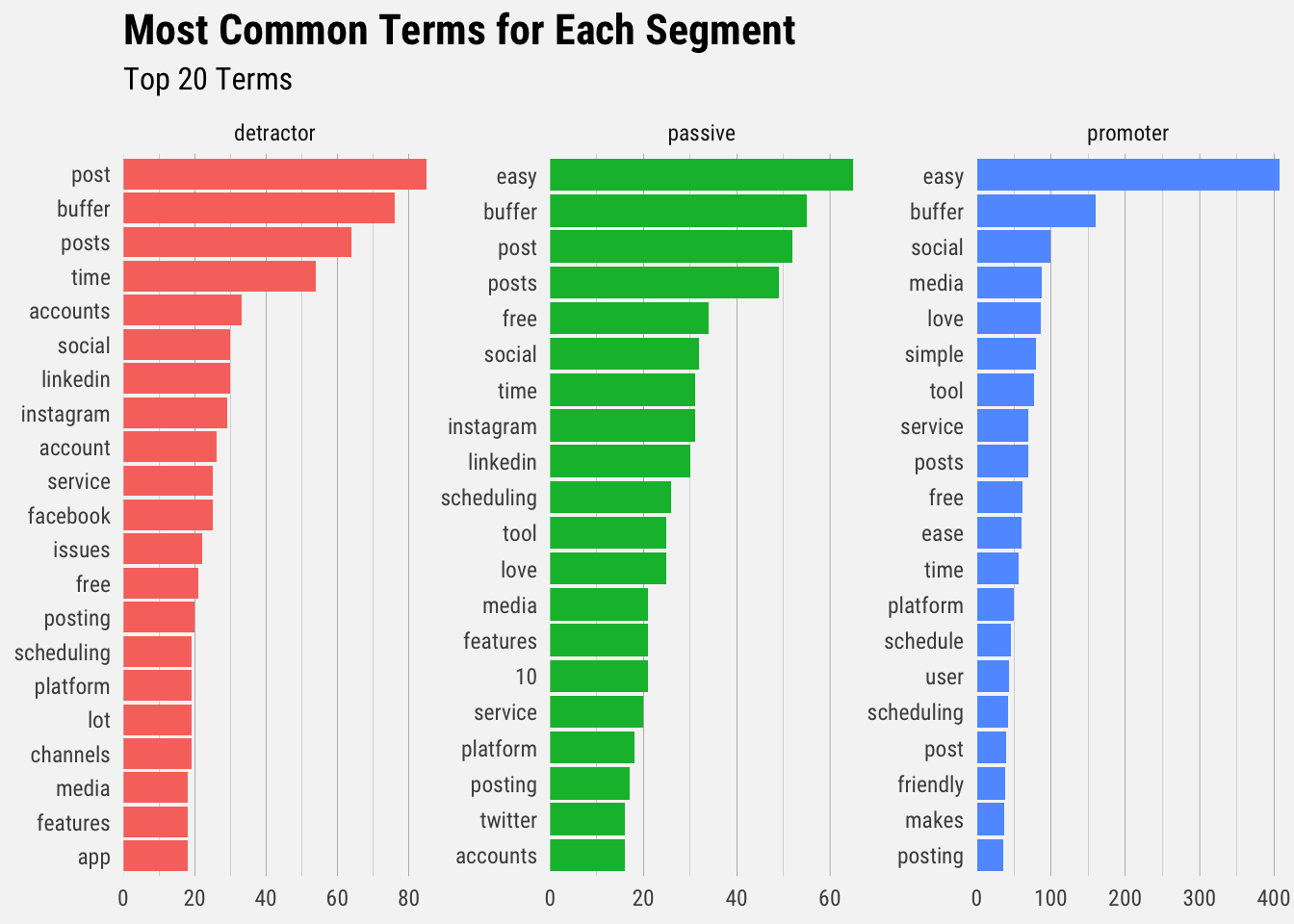 We can see that there are words that appear frequently for all three segments (e.g. “buffer”, “post”). To address this we’ll use a different technique to look at words that occur with more frequency for promoters than for detractors or passives.

The idea of term frequency–inverse document frequency (tf-idf) is to find the important words for the content of each document by decreasing the weight for commonly used words and increasing the weight for words that are not used very much in a collection or corpus of documents, in this case, all survey responses for each segment. Calculating tf-idf attempts to find the words that are common in a text document, but not too common.

Let’s look at words with high tf-idf in the NPS surveys. 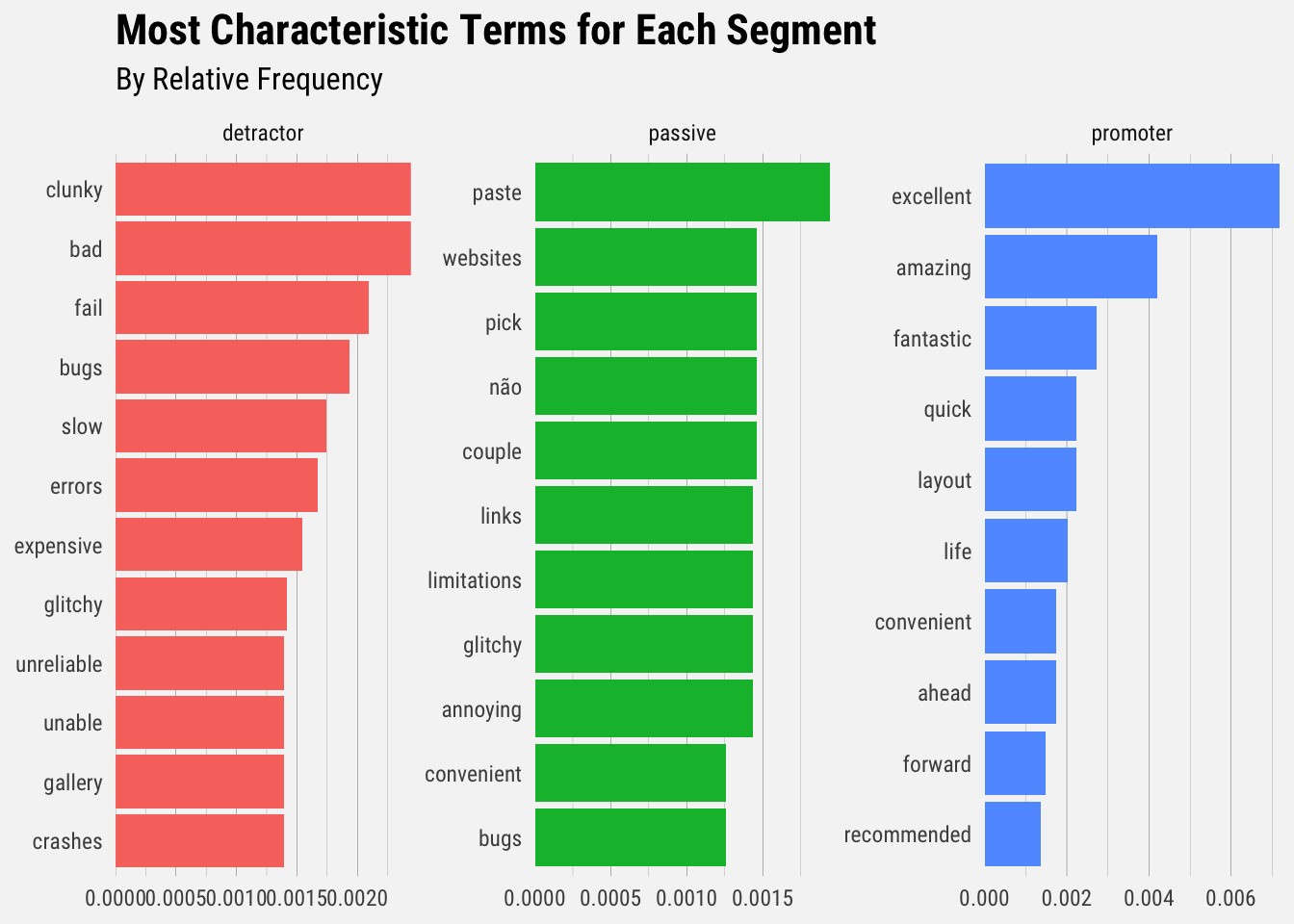 We can start to pick up themes that appear for detractors and promoters. Detractors mention poor performance and reliability, whereas promoters do not. Passives seem to resemble detractors more than promoters.

It’s great to see bigrams like “super easy” and “user friendly”. Next we’ll visualize the network of bigrams by looking at words that have strong correlations with other words. I’ll spare you a long explanation of the methodology for creating this plot. 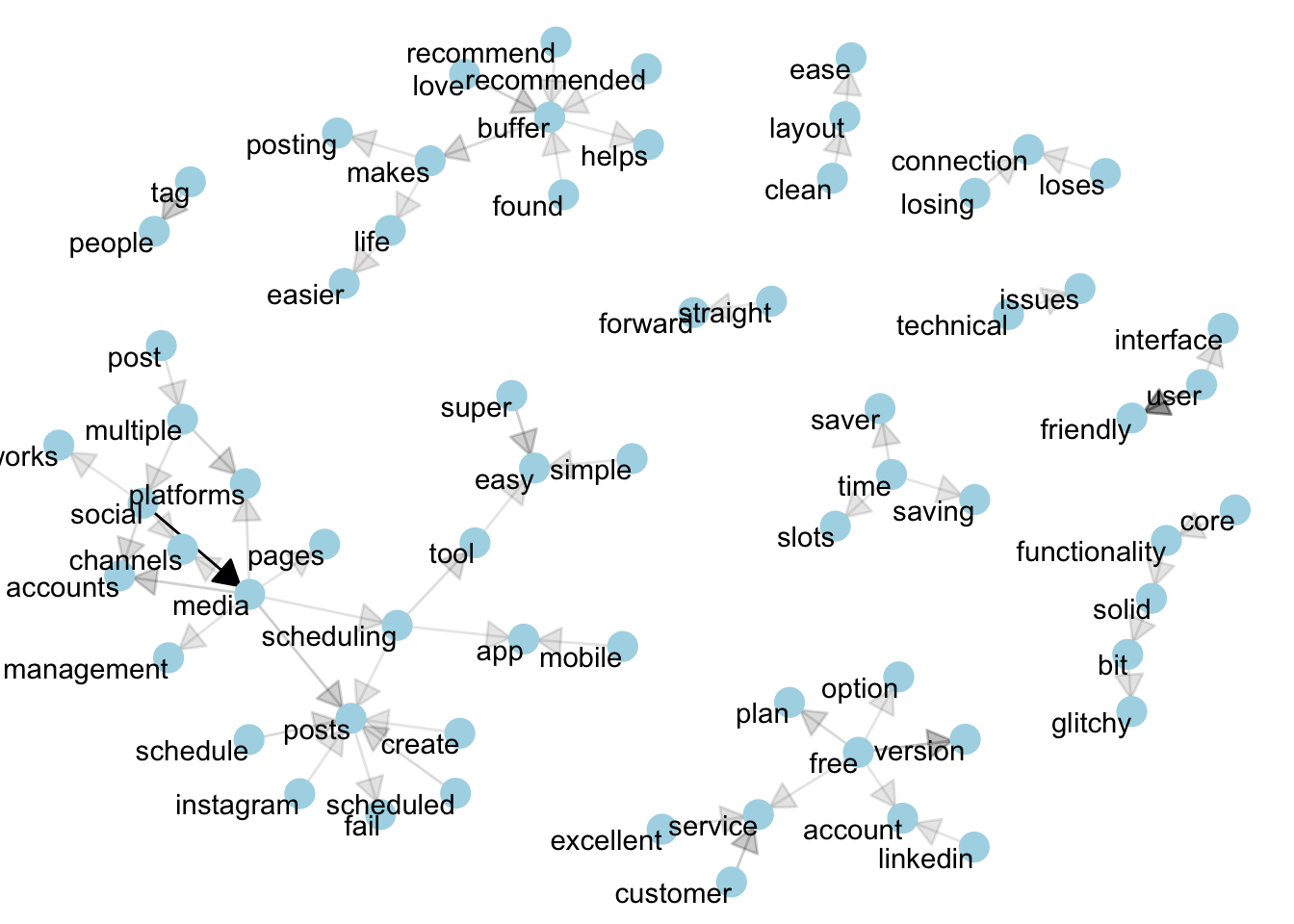 Here we can see the relationships between terms. Things like people -> tag and technical -> issues make sense. “Posts” and “media” appear to be central nodes, as well as “loses/losing connection”.

Let’s recreate this plot only for detractors and passives. 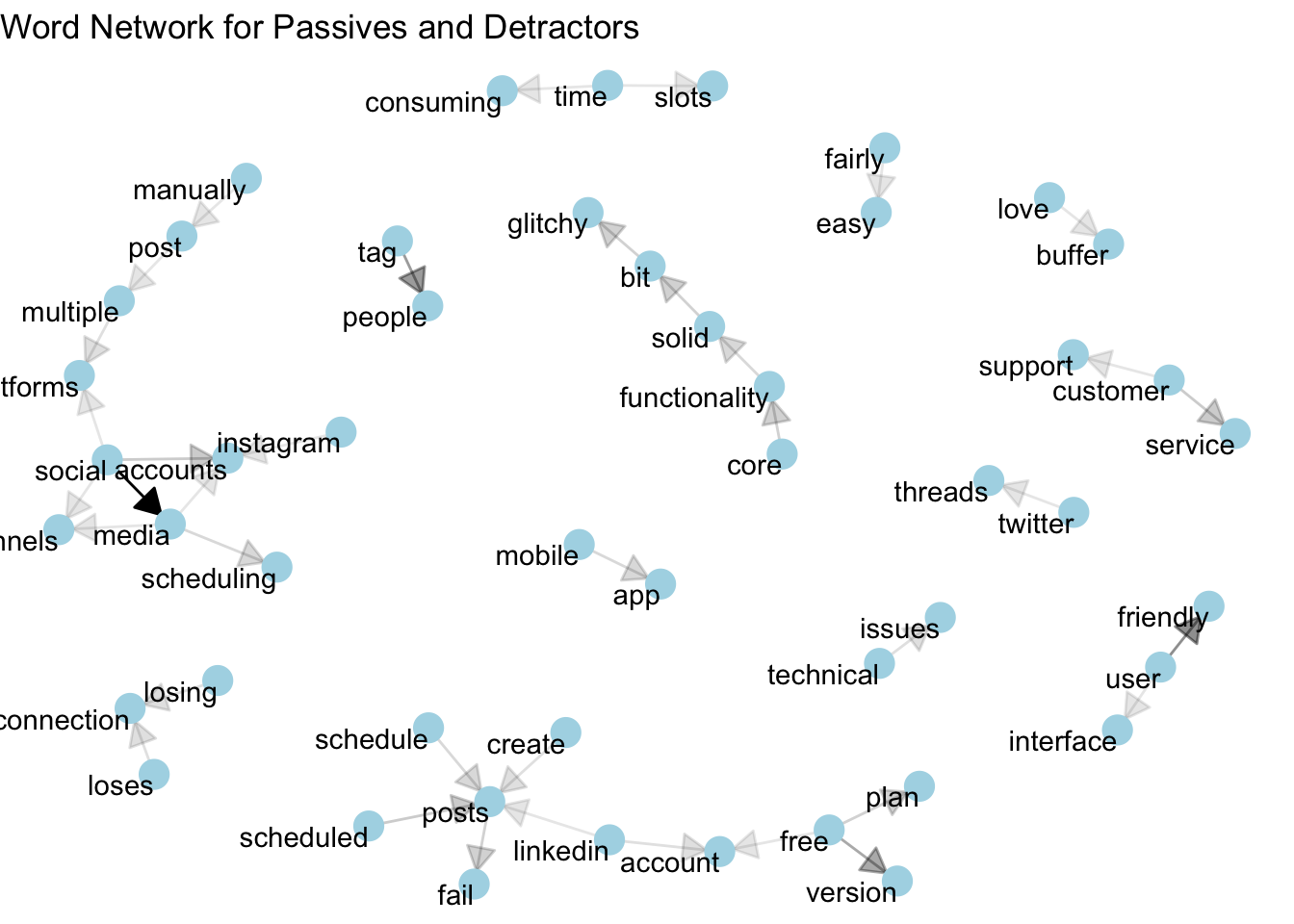 These are the related terms for detractors and passives. Core functionality, technical issues, losing connection, people tagging, and time consuming slots are all interesting things to potentially look into. It’s nice to see that “love buffer” is still present. 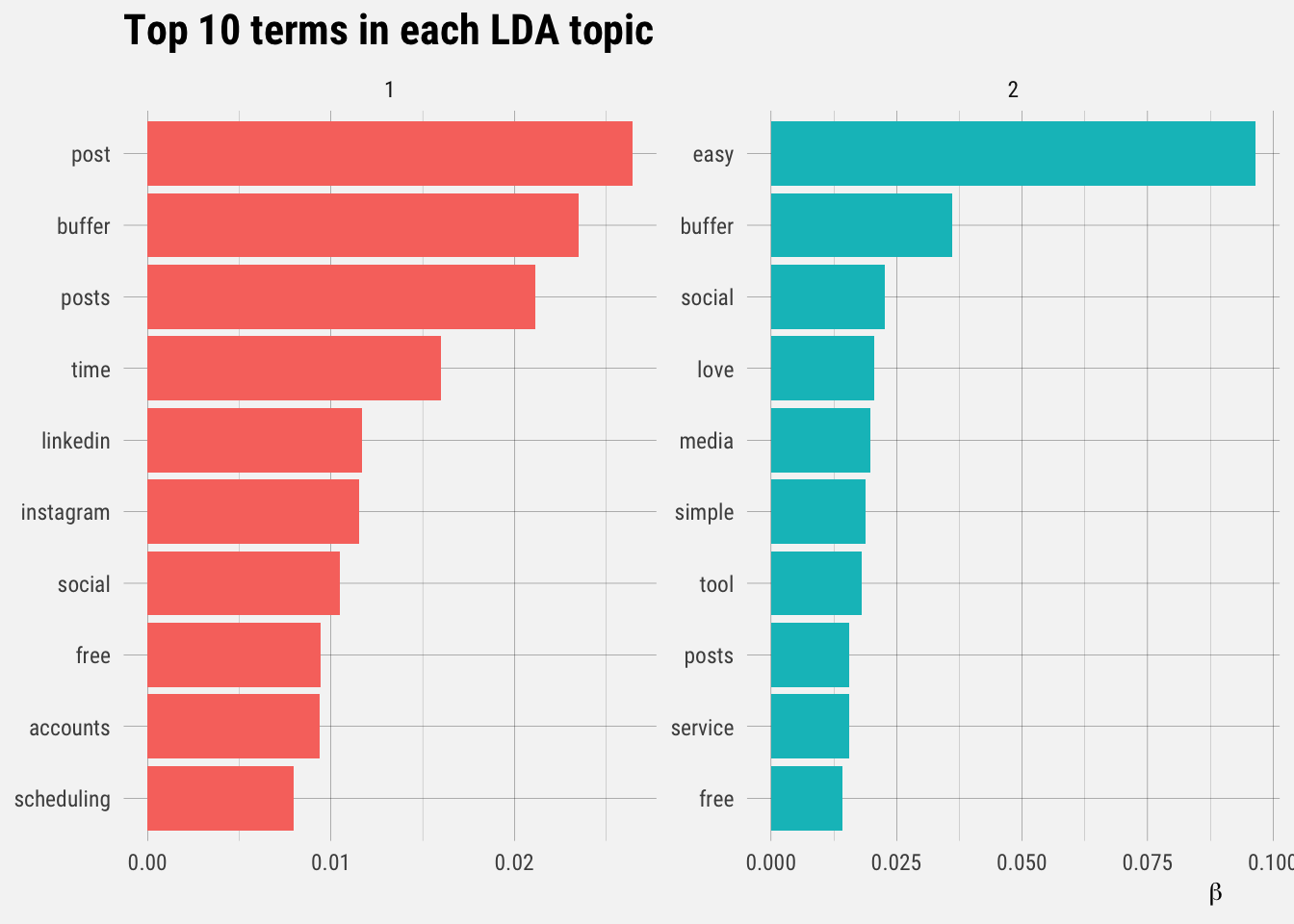 Once some time is pass, we can do some more analysis to see which terms are appearing more or less frequently over time.